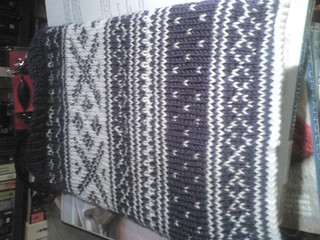 myself as a gift. And I found the instructions clear and simple.  The recipient is happy with it which is a bonus.


Each section covers a particular pattern; Marius; Setesdal; Fana and Voss, there's also a section on techniques and advice on stranded knitting.  She discusses each pattern and it's history in Norway and how it developed.

Fana lowers the contrast yet again to light blue and white, delicate but interesting.
Beret - knit in DK.
Half-sweater - again in DK this is sometimes referred to as a Caplet by many people, it's a shoulder cover that comes just down to the underarms.
Sleeves - could be combined with the half-sweater under or over a coat for added warmth.  Knit in DK again.
Cafetiere cosy - Knit in DK again, this would be a good starter to learn how to do the techniques.
Cup Cosies - also in DK, this uses a variety of the Fana patterns for handle-less cups or tall glasses.

Dublin City Public Libraries offer me no inducement to write these other than a salary and access to the books.
Posted by Deirdre at 16:19 No comments: Links to this post

Deirdre
Dublin, Ireland
These are my completed projects and some book reviews, all knitting or crochet books.
Book links link to Amazon.co.uk, Amazon.com & Bookdepository and are affiliate links. Yes click-through will help keep me in books. Ravelry Links are to books and patterns available on the site, I have no affiliation with that site other than being a satisfied user.
Yes I would be amenable to free books or yarn, contact me by comment. I do screen but only for spam. These reviews are my property, I would be willing to review for you if you want, contact me to discuss terms. Email me at Wyvernfriend at gmail dot com
I work for Dublin City Public Libraries who have no affiliation with this blog and I do not represent them with this blog. They do provide me with plenty of the books though!

Currently being worked on

Some of my Knitting Books from Librarything

Wyvernfriend is a participant in the Amazon Europe S.à r.l. Associates Programme, an affiliate advertising programme designed to provide a means for sites to earn advertising fees by advertising and linking to Amazon.co.uk & Amazon.com