(as usual all pattern links are to Ravelry)


What surprised you about the Irish Yarn Industry?
When I wrote an article about Kerry Woollen Mills for Yarn Forward several years ago, I knew nothing about the Irish yarn industry.  I learned a lot preparing that article, both about yarn production in general and the Irish industry in particular, and it sparked a curiosity about the other mills producing hand knitting yarn in Ireland.  While travelling around researching the book, I suppose one major surprise for me was how much imported fleece needs to be blended with Irish fleece to produce the wool.  It never occured to me that the thriving (lamb) meat industry here in Ireland would mean that sheep were bred for quality of meat rather than fleece, although it makes sense once you think about it!  In some cases, the cost of sheering the sheep is not covered by the price you get for it – which really doesn’t encourage sheep farmers to breed sheep for their fleece quality.

Is there a difference between Irish Likes/dislikes in yarn and patterns to the US?
I don’t think there is a huge difference in the Irish and American markets; I suspect we are now such a global community thanks to the Internet that very strong national preferences are no longer as obvious (in knitting at least).  I do suspect that Irish knitters would have a little more tolerance for rustic wool, as the durable/rainproof qualities it has are of more advantage to us over here!

Have you been surprised about the ideas about Irish Knitting in the US?
I lived in the US for several years, and have many friends and family still in the US. My general experience is that there is frequently a very romantic, nostalgic vision of Ireland; both Ireland in general and of Irish knitwear (which is generally assumed to mean Aran knitwear) in particular. Aran stitches are beautiful, and are an important part of the knitting repetoire, but I think that it can narrow how knitters view the work of Irish designers. Just as contemporary Ireland is much more than pints of Guinness by a peat fire, I wanted this book to help create a new face for Irish knit design – building on the beauty of Aran stitches but moving them forward for today’s knitter. Hopefully as more Irish designers get their work out in the global market, knitters will develop a broader vision of both Ireland and Irish design.

What would you like to see happening in the Irish Market?
As I discussed in the book and other interviews on the blog tour, there are only a few mills producing yarn for hand knitters, and another handful of hand dyers who have emerged recently. They are all producing a interesting and unique range of yarns, and one thing I’d love to see is more pattern support for these yarns. I really want to keep producing patterns for Irish yarn and I hope that other designers (whether Irish or not) will come join me!  New and innovative patterns available for yarns really help rejuvenate how they are viewed by knitters.  When knitters get ideas from patterns about what they can do with a yarn, it inspires knitters to use it (whether or not they use the pattern itself).
I would also love if there was a way for Irish farmers to be encouraged (and financially rewarded) for breeding more sheep in Ireland that have fleece suitable for spinning. I’ve heard talk of co-ops and sponsoring so maybe this is something we’ll see in the next few years.

Have you come across any surprises in your research?
To be honest, until I started researching the whole subject of Aran knitwear I knew nothing about the history of the Aran and how relatively recently it came into being!  This was a real eye-opener for me.  I’d encourage anyone who wants to read further on this subject to take a look at ‘The Aran Sweater’ by Deirdre McQuillan which is a small book with lots of information.

Have you been surprised about reaction to any of the patterns? Positive or negative?
I’ve been really blown away by the (positive) reaction to the book so far!  I’m very grateful that knitters are enjoying it so much.  The biggest surprise for me is how popular the men’s and girl’s patterns have been, in particular Straboy and Rossbeg.  Often women’s garments dominate but I think the full range is holding its own in the book!

Which pattern was the hardest to design?
I think one of the longest pieces to design was the Bundoran hat.  I had finished the Killybegs cardigan and wanted to do a hat with the same stitch pattern.  I thought it would just fly as I already had the basic concept in mind.  It took three hats before it was right! The first one was too cable heavy and dense.  The next one was too short and then, the third one was ‘just right’.  Sometimes it can take a few run throughs before you get a design to work from concept to reality.

Which one flew off the needles?
The first that comes to mind is the Rathcooney set.  While working with the cocoon stitch I started playing around with how it flowed into ribbing.  When I went to test the idea in the mittens and hat it worked perfectly first time round and was finished really fast!

Any Surprises in the Blog Tour ?
There have been a couple of book giveaways on the tour and I’ve been amazed at how popular they have been.  At last count the comments on the Knitspot giveaway were in the hundreds!  I was also very pleasantly surprised at how much fun doing a podcast was with Marly Bird.  It was my first time doing a podcast so I was fairly nervous.  Fortunately Marly made the whole process a lot of fun.  I’d really love to thank everyone who has taken part in the blog tour for doing such a great job, and This Is Knit in Dublin for hosting an amazing launch party last month!


Impressions:   Carol talks about Aran Knitting and it's origins (see my post as well on the topic) Starting with reviews and comments about the three remaining working Woollen Mills in Ireland with patterns using the yarns the book finishes with some Irish dyers. 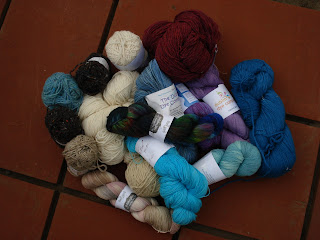 To the left you can see some of the yarn I have accumulated over the years, much of it is used in this book, all either spun or dyed in Ireland!  There is some that's a bit rarer that isn't mentioned (like the Kerry Alpaca I picked up on holidays, which is only done in very small batches)   Some of this is quite modern yarn, some of it older but this book would allow me to use up some of it!

I found the patterns to be modern but not without respect to the past.  There are some great Aran inspired patterns here with some deft modern touches.  Entertainingly the names are places from the areas the yarns come from.

There's some helpful advice on sizing and adapting patterns, many of the patterns are in the round or flat with minimal seaming.

Number of Patterns: 20 (the blanket is a variation on one of the shawls)

Split of patterns: mostly adult with some children's.

Size Range: Women's patterns are 27-51"; men's 37.5-53.5" and she does include the actual sizes the pattern is supposed to come to so that you can adjust for your own style.

Target Audience: Intermediate to advanced, there are no projects without at least a little cabling.

How to knit guide: not really, there are some guides to some of the extra techniques but not the very basics, the book assumes a certain competence with knitting

Experimental/Classical/Modern: Classical with a modern twist.

Comments on patterns (all links to patterns are from Ravelry):

Killorglin (pictured right) is the cardigan that features on the front of the book, knit in Aran weight yarn, this is the one cardigan that my husband requested I knit him.... I'm sure it would be fine without the shaping!

Tralee is knit in a DK yarn, this is a skirt mostly knit plain with a cable hiding in the kick pleat. I do like how this looks, not sure it would work for me but it's interesting!


Listowel is a shrug with a heart-motif on the back.  This would probably be a great item as a wedding shrug or communion shrug.  Knit in Aran weight yarn this would be a pretty quick knit.

Cushendale Woollen Mills:
Knockmore is a nice compromise of a man's jumper with enough patterning using twisted stitches to break up the monotonous acres of knitting without offending male sensibility, the only objection my husband had to it was the original colour. Knit in a dk weight.

Dangan is either a baby blanket or a shawl.  Knit in a sportweight yarn.

Belville  uses the tweediness of the yarn to create a nicely shaped jumper with some colourwork on the yoke, knit in dk weight yarn.

Ballinagree is a sleeveless jumper designed for boys in a DK weight yarn, looks pretty unisex to me!

Kilmanagh uses some colourwork on the flap (a bag with a flap! I'm planning for this one!) and sides.  It's interesting and knit in DK weight. 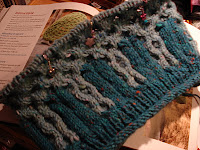 I liked this one enough I started it (progress pic to the left)!  Though I couldn't help messing with it and adding in colourwork.  It's not finished because I have to get more of the pale turquoise yarn.  I like how the cables interact with the yarn.  Knit in Aran weight yarn, using some of the features of the cables from Killybegs.

Ardara is a nice sleeveless cardigan, one on my would like to knit shortlist. Knit in Aran weight yarn.

Glengesh  is a wrap in an Aran weight yarn; worked from the bottom up with some shaping provided by short-row shaping.

Straboy is another one that makes my husband mutter noises about wanting one!  Knit in an Aran yarn I've seen this in action and it looks well.

Rathcooney Hat and Fingerless Mitts simple elegance, this is an interesting piece the cocoon stitch changes to ribs.  It's a worsted weight yarn that has some silk in it.  Hence the name!


Buy/Borrow: I have to admit that if I hadn't got a copy, and I had borrowed it from the Libraries I would have bought it.  I like it and want to make too many patterns from the book not to want it.

Where found: I got a copy to review from Wiley, Dublin City Public Libraries has some copies in stock

Deirdre
Dublin, Ireland
Yes I would be amenable to free books or yarn, contact me by comment. I do screen but only for spam. These reviews are my property, I would be willing to review for you if you want, contact me to discuss terms. Email me at Wyvernfriend at gmail dot com
I work for Dublin City Libraries who have no affiliation with this blog and I do not represent them with this blog. They do provide me with plenty of the books though!

Currently being worked on

Some of my Knitting Books from Librarything

Wyvernfriend is a participant in the Amazon Europe S.à r.l. Associates Programme, an affiliate advertising programme designed to provide a means for sites to earn advertising fees by advertising and linking to Amazon.co.uk & Amazon.com